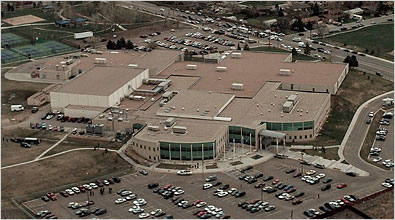 The Day of The Massacre

The morning of April 20th Eric and Dylan placed a small fire bomb in a field south of their high school near a fire station. It was on a timer to explode and intended to be used as a distraction to stall authorities. Their original plan was to set bombs in the cafeteria and let them go off about an hour before noon. They would then wait outside shooting survivors fleeing. As The boys were setting up the bombs Eric ran into another student named Brooks Brown. Eric and Brooks had been fighting but recently made up. They had a test earlier that morning, which Eric skipped. Brooks asked where he had been to which Eric replied, “It doesn’t matter anymore… Brooks, I like you now. Get out of here. Go home.” Brooks walked away and left campus. Around 11:18 AM the Eric and Dylan realized the bombs in the cafeteria failed to go off. Had the bombs gone off, they would have potentially destroyed the entire cafeteria building. They decided to relocate their position. They walked to the top of a small hill that sat right outside of the main exits of the building. At 11:19 AM they started shooting. Rachel Scott was their first victim. She was sitting near the hill having lunch with a friend, Richard Castaldo, who was injured. As students began to exit the building after class let out, Eric and Dylan continued shooting students leaving the buildings. Many students and teachers did not realize it was gunfire. They assumed it was a senior prank. In-between shooting at students the boys would also toss pipe bombs. Sometimes the bombs would go off, other times they would fail. At 11:22 AM the campus security officer was called. He was returning from his lunch break not too far away but quickly returned. He spotted one of the shooters and attempted to exchange gunfire with him. No one was hit and the shooter got away. At this point, the security officer called for more backup. Shortly after, two more policemen arrived on the scene. They spotted some wounded students and attempted to help them when Eric had opened fire at them. The policemen returned fire causing Eric to retreat. Meanwhile, students were still inside hiding in classrooms and administering first aid to wounded students. Eric and Dylan were now inside and shortly before 11:30 AM they tossed a couple bombs into the cafeteria, they exploded. They then continued to the library. After entering they demanded everyone stand up. No one stood, to which point one of the shooters said, “All jocks stand up! We’ll get the guys in white hats!” White hats were in reference to the baseball players who often wore white hats around campus. Again, no one stood up. So Eric responded, “Fine, I’ll start shooting anyway!” Eric then shot at some nearby desks and stopped to reload his gun. While inside the library the boys noticed the police outside the building. They began shooting at the police, who then returned fire. They stopped shooting and turned their attention to those hiding in the library. Many students and a few teachers were hiding under desks in the library. During the entire duration of the attack, Eric and Dylan spent a considerable about of time in taunting students. Some students they would talk to then shoot, some they let live after exchanging words, and other times they would randomly let off a few shots. It seemed that there was almost no plan to who they decided to shoot. By 11:35 AM the injuries had ceased but the shooters were still at large. Eric and Dylan left the library and began walking down other halls of the school. They continued to toss bombs, not always going off. Often they would look into windows and bathrooms. Again taunting the students from the outside but no longer shooting at them. After about 30 minutes the boys returned to the library. At this point, the students that were in the library and able snuck out another door to hide in an adjoining room. Everyone left in the room was either unconscious or dead. At 12:08 PM the shooters committed suicide. Eric had shot himself through the roof of his mouth. Dylan shot himself directly into the side of his head. It was reported the only words they heard coming from Eric and Dylan moments before their death was, “One, Two, Three.” Only a few minutes earlier the SWAT team had arrived at the school. During these moments they were planning their entry, assisting with ambulances, and providing aid to the injured. At 1:09 PM the SWAT members had entered the school and began evacuating more people and helping those injured. It took a while to clear the entire school, some had been in hiding from the moments the shooting began until 3:30 PM. Finally, at 4:30 PM the school was declared clear. As further sweeps continued it was discovered that there were still numerous explosives hidden around the school. Additional police were called in to do a more thorough search of the area.

It did not take much to identify the two shooters, Eric Harris and Dylan Klebold. Their motives were not crystal clear. Rather it seemed like a series of events that snowballed into such big issues for the two teens that they snapped. What we do know, based on their journals and blog, was they wanted to be more effective than the bombing in Oklahoma. The two boys had run a website about the video game Doom. The website also featured a blog where they talked extensively about the things that upset them in the world. Often mentioning violent acts and going beyond just feeling anger. Specifically, Eric had written about wanting to kill those people that had angered him. Many of his entries were about people from his high school who had upset him in one way or another. This was not the only alarming content on their website. The blog featured detailed tutorials on how to construct various bombs. These personal entries combined with details on how to build a bomb could have made any visitors of the website nervous. The website had made its way around the school, friends, and parents, eventually making its way to the city sheriffs office. The website was reported and the boys were arrested on January 30, 1998. It turns out both of the boys had a history of anger and drinking that became very clear during their arrest. Unfortunately, this was only part of the story and did not depict the entire picture. Their anger and drinking stemmed from a series of other issues with the boys. This could have potentially given authorities a better understanding of why they were acting out and get them some proper help. According to Eric’s appointed psychiatrist, he had depression, anger, and suicidal thoughts. He was prescribed antidepressants, being put on both Zoloft and Luvox at different times.

Debate over what cause the shooter to act

Why did this happen? Should anyone else besides the shooters be blamed? How can we prevent shootings like this in the future? After any mass shooting questions and analysis begin into why this happened and how can it be prevented. After the Columbine High School Massacre debates and discussion revolved around many different topics. Gun control, high school cliques, bullying, subcultures, music, the use of antidepressants by teens, the internet, and violence in video games all were focuses of conversation. These were often followed by an agenda of whoever was having the conversation. Some felt got control needed to be more heavily regulated, especially since Eric and Dylan had bought the guns from some friends. Others looked at the way the shooters talked about high school cliques and even looked into the culture at Columbine High School. It was noticed there were very secured high school cliques, sometimes where jocks were held higher than other students. With this, the subject of bullying was brought up and its effect on the students who were bullied. Subcultures were considered based off the hobbies the students were into. One of these subcultures was goth and heavy metal music. Many felt this subculture often revolved around violent and unpleasant thoughts which influenced the teens. Eric was taking antidepressants which were debated on if these can actually do more harm then good for a teen. The internet and violent video games were often a topic of discussion. People felt these influences could potentially warp good kids into violent kids because of the constant exposure to these sort of thoughts and images.

One of the main topics discussed was bullying. Eric and Dylan were well versed in what it felt like to be bullied. It was often referenced in their journals and blog. They were considered outcasts by themselves and their classmates. Even their less popular friends referred to them as the “losers of the losers.” Just a few weeks before the shooting, it was reported that the two boys were sprayed with ketchup and mustard by some jocks in the cafeteria. They were called “faggots” and “queers” by their tormentors. It was no surprise the jocks were one of their targets during their raid. It also came out that teachers often looked away when the bullying was taking place. Since this was such a big topic of conversation after the shooting, much research was collected and studies were done on what makes an average teen turn into a mass murderer. A factor that did seem to be consistent was their school life and consistently being bullied.

Mental health was another popular subject when it came to discovering what it was that made these boys turn. Their journals revealed many troubling thoughts and their prior arrest revealed their anger and drinking issues. Eric’s meetings with his psychiatrist revealed a long list of mental health issues. While Dylan often talked about his inability to form relationships with women. All of these issues piled on the teens and in turn amplified each issue. In their journals it was revealed that both did not care if they lived or died, nor did they have compassion for the lives of others. They were both dissatisfied with their lives and had no interest in continuing. A messy cocktail of mental health issues that contributed to their horrific actions.

The Columbine High School massacre is considered one of the deadliest school shootings in all of U.S. history. The attack injured 21 people, killed 12 students and 1 teacher. This does not include the two killers who committed suicide. For this reason, schools across the country quickly put in place a “zero tolerance” policy for acts of violence or threats committed against the school. Today it is still talked about as an example of a number of political issues. The case is referred to when talking about bullying, mental health, and gun control. The debate continues into what should actually be done to prevent these sort of shootings.
Entradas similares