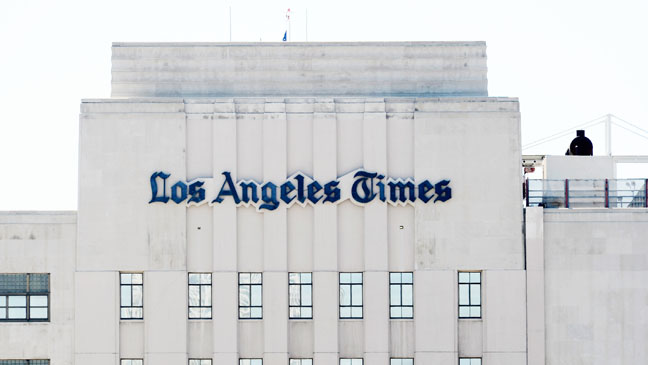 History of the Los Angeles Times

The largest metropolitan newspaper on the west coast was founded in 1881 by Nathan Cole, Jr. and Thomas Gardiner. The new Los Angeles Daily Times was printed by the Mirror Printing Office and Book Bindery, but after a short time Cole and Gardner were unable to pay for the printing.
They turned over ownership of the paper to the Mirror Company to pay off the debt.
In 1882 Harrison Gray Otis took over as editor and finally launched a financially successful paper, then in 1884 Otis purchased both the Times and Mirror, combining them to form the Times-Mirror Company.
In 1886 Otis bought out his partner in Times-Mirror, dropped the word “Daily” from the paper’s name, and continued to serve as the publisher until his death in 1917 when his son-in-law, Harry Chandler, took over.
The Chandler family published the Los Angeles Times until the 1980s, then went through a series of publishers until the paper was purchased by the Tribune network. Tribune is the only media company at the time that holds television, news, and online content in the top three major markets (New York, LA, and Chicago). This reaches 80% of US households. Under Tribune, Our Times, individual publications serving different neighborhoods in LA, were shut down. The paper begins to focus instead on news that affects all Southern Californians.
While owned by Tribune, the Los Angeles Times encountered financial problems and declining public respect.
In 2008, in order to compensate for declining profits, staff cuts were made. A public backlash ensued, and a satirical website, notthelatimes.com, was created. Finally in 2008 Tribune filed for bankruptcy protection. Sam Zell purchased both the Los Angeles Times and the Chicago Tribune.