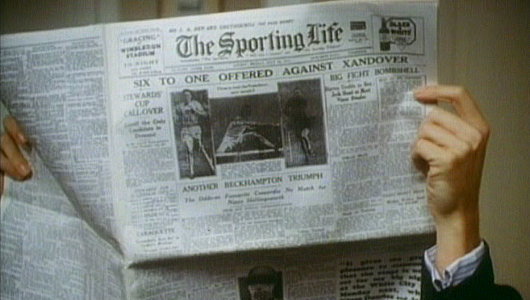 Sporting Life was first published in 1859 as a twice weekly paper focused mainly on horse racing. It moved to being a daily paper in 1883. In 1886 the owners of Sporting Life purchased rival Bell’s Life in London and Sporting Chronicle.

For over 100 years Sporting Life was part of Britain’s pop culture. The paper was received as cheeky and classically British, and was even rumored to be the Queen Mother’s favorite newspaper.

However, in 1998, a fateful merger would spell destruction for Sporting Life. Mirror Group now owned Sporting Life, and in 1998 purchased competitor Racing Post. A merger was originally planned, then a relaunch of the combined publications as a sports daily was anticipated. Kelvin McKenzie, the deputy chief executive for Mirror Group, brought in John Mulholland as editor.
Before the relaunch of the paper, McKenzie leaves and is replaced by Mirror Group chief executive David Montgomery, who has a different idea for the direction of the planned paper. Mulholland, working with a £20 million budget, had already begun the process of hiring staff for the paper. Two months after stepping in, Montgomery fired Mulholland and postponed the scheduled relaunch of the paper. By January 1999 when Montgomery is forced out, it had become all but obvious that Sporting Life may never relaunch. According to The Guardian, Mirror Group’s mishandling of the project was at fault for the failed relaunch.

Later in 1999, Trinity Newspapers bought Mirror Group. The companies combined to form parent company Trinity Mirror. In a part of this merger and restructuring, Trinity Mirror decided to sell off some of its sporting assets to focus more on other media. Sportinglife.com, which had been online since 1996, had become the focus for Sporting Life after the newspaper’s failure. In 2001 Trinity Mirror put sportinglife.com up for sale, asking around £25 million. Although there was some initial interest, there were no buyers. Later in 2001 online bookie company ukbetting purchased the site for a fraction of the estimated value, buying the remains of Sporting Life for £2 million.

If you're looking for Sporting life back issues follow these steps: