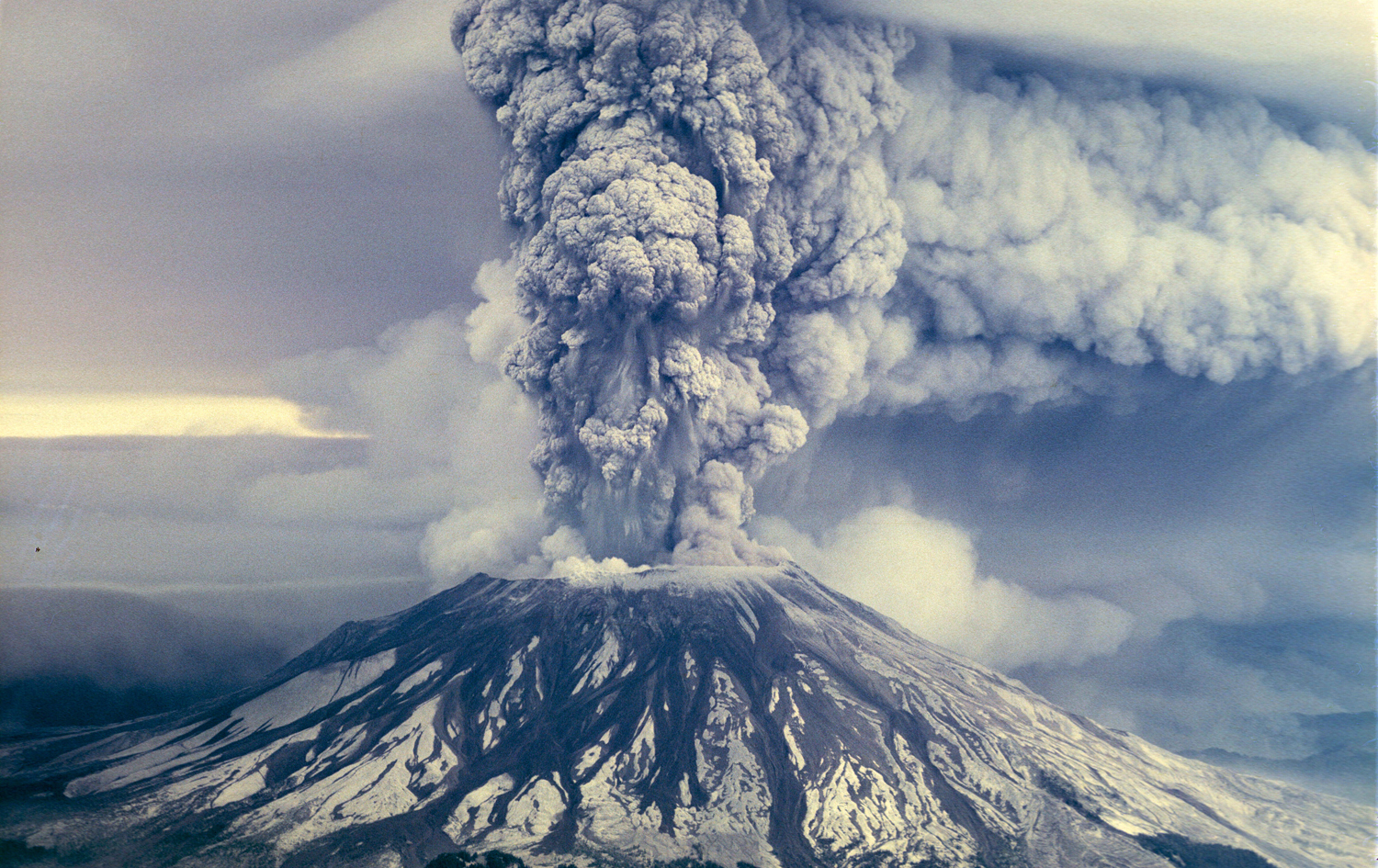 Mount St. Helens is an active volcano located in the Cascade Mountains, just 95 miles south of Seattle in Washington State. It has an elevation of 8,363 feet with a prominence of 4,605 feet. However, its size is not what makes this mountain so famous. On May 18th, 1980 the volcano exploded shooting lava, ash, and shockwaves into the area. This was a rare occasion for the area, the mountain was classified as a volcano in 1835. Over the last 500 years Mount St. Helens has had 4 major eruptions, one being the eruption of 1980. There have also been a bunch of minor occurrences such as earthquakes and spurts of smoke and ash. The volcano was considered inactive from 1857 - 1980, until one of the largest eruptions in U.S. history.

Leading up to The Explosion

Mount St. Helens is located in a fairly popular area. The volcano rests a few hours outside of a major city, Seattle, with numerous towns surrounding the area. This makes it a popular site for campers, hikers, and visitors often visiting the base of the mountain. Early in the year of 1980, the volcano started showing signs of possible danger. One of those signs was a minor explosion causing a crater to open at the top of the volcano. This was due to the immense pressure building up inside. Kathy Anderson, a US Forest Supervisor was in the area during the explosion with her tree planting crew. She and her crew assumed there were some lumberjacks nearby which caused the noise. Not uncommon for the area. Shortly after the United States Geological Survey (USGS) started to receive data that an eruption was in the works. Scientists began heavily monitoring the mountain. David Johnston, a scientist monitoring the mountain, reported to news outlets he feared major destruction was on its way. He was interviewed about the potential damage March 28th, 1980. Local officials started to realize the potential danger surrounding the volcano and the Washington State Governor declared a state of emergency. This ultimately caused tourists and media camera crews to visit the mountain in hopes to see something happen. Most of the occurrences up to this point were small smoke blasts, loud noises coming from inside the gurgling mountain, and earthquakes. By April 3rd, roadblocks and evacuations began. Some refused to leave the area, stating this was their home and had no intention of leaving. One of those individuals was Harry R. Truman. A local to the area who refused to evacuate. He was routinely interviewed and considered a hero among some folks. While the majority of the area was evacuated, tourists and camera crews worked to get as close as possible to see anything happen. Small bursts of ash and earthquakes would occur throughout the day. This ultimately gave the visitors exactly what they wanted. This reinforced their desire to visit the area and encourage others. Dan Millar, a Volcano Hazard Specialist, tried to convince emergency services of how serious the situation was going to be. Hoping that there would be stricter regulations on allowing people into the area. Despite his attempts, nothing else was done. A bulge started to appear on the side of the mountain above where pressure was building. This bulge was growing by about 5 feet every day. Fortunately, it was not noticeable enough to encourage more tourists to visit the area. Around the end of April, the excitement began to die down. Less media coverage on the news and fewer tourists in the area started to convince people that nothing was going to come of the supposed eruption. The ground temperature, growing bulge, and readings became consistent. Indicating to some that this meant nothing was coming. As the conditions plateaued, Mount St. Helens residents became angered still unable to return to their homes. Safety crews had started evacuating people April 3rd, and locals were still unable to return to their homes a month and a half later. They became agitated and demanded authorities let them visit their homes. On May 17th, authorities agreed to let residents visit but not move back. Residents were required to sign a waiver stating the government was no longer responsible for anything that happened to them or their homes while visiting the area.

On May 18th, 1980, at 8:32 AM the volcano erupted starting with a 5.1 earthquake. The pressure built in the mountain caused a large chunk on the side to burst. The explosion had the force of about 10 megatons of TNT, ultimately causing the largest landslide in history. The landslide was estimated to be traveling somewhere between 110 - 155 miles per hour. Meanwhile, bursts of burning ash flew down the mountain at over 80 miles per hour. Railroads were swept away, homes were destroyed, and roads were dug up. Within seconds extremely hot steaming ash had filled the sky. The explosion turned trees into toothpicks and by 9:00 AM the landslide had caused flash flooding in the area. The flooding was due to Spirit Lake near the base of the mountain. When the landslide hit it cause 600-foot waves to displace much of the lake. Trees as far away as 19 miles were uprooted. As this occurred a column of ash rose from the volcano into the air. The column was about 80,000 feet or 15 miles high. Within minutes of the eruption, emergency services were dispatched. For many, it was too late. One of those unlucky individuals was David Johnston. David was one of the scientists monitoring the mountain and had warned news outlets on March 28th of the danger surrounding the situation. David was scheduled to monitor the mountain at a vantage point, 6 miles from the north end. The morning of May 18th the mountain burst and he was able to get out this quick message, “Vancouver! Vancouver! This is it!” Immediately after his message, the line went dead and he was never heard from again. Today you can visit the actual spot David stood when he witnessed the explosion. It is now known as the Johnston Ridge Observatory. Another man who was never heard from again was Harry R. Truman. Harry was the local hero who lived near the mountain and was unwilling to leave during the evacuations. It wasn’t long before rescue teams were dispatched. Due to the ash in the air, it was especially difficult for a helicopter crew to find and rescue individuals. The air was so thick with ash and the land had been so warped by the explosion, flash flood, and landslide, rescuers were unable to make out any landmarks. Including Spirit Lake, a large lake in the area that on any other day would have been easily identified. The ash covering the area was unbearably hot, but by 10:10 AM the ash had started to reach Yakima, Washington and had significantly cooled down. By noon there was an estimated 3 people missing and 7 confirmed dead. To combat the difficult vision, rescuers started looking for footprints in the ash to find survivors. By 3:00 PM the sky in the surrounding towns had turned dark. The ash had fogged up the air and sky creating an eerie feel for all those affected. Throughout the rest of the day, small eruptions shook the area. The I-5 was completely stopped with people getting out of their cars to take photos of the smoke and ash that was still rushing out of the mountain. In the 36 hours that passed after the explosion, 150 people were rescued, 57 were killed, and 200 homes were destroyed. Jimmy Carter flew over the area 3 days later and explained it was one of the worst things he had ever seen.

After the explosion, the area was rocked with nearly two months of earthquakes. Not to mention the ash, and steam that overtook the area. The ash lifted into the air had been deposited over 12 states including, Washington, Oregon, Montana, Idaho, Wyoming, Colorado, New Mexico, Oklahoma, Nebraska, North Dakota, South Dakota, and Minnesota. The majority of these states received up to 1/2 an inch of ash, while central and eastern Washington received 3-5 inches of ash. The ash was so bad in some areas, locals had to shovel it off their roofs to keep them from collapsing in. By June 1980, rescuers stopped finding survivors and were only left to remains. The area was rocked again June 12 and July 22, 1980, where more eruptions and earthquakes hit. But both were not nearly as detrimental to the area. The damage had clearly caused plenty of destruction in the area. Total costs were estimated to be over $1 billion. Despite the high cost, the locals in the area found a silver lining and opportunity to seize. Shortly after tourism increased dramatically and locals fed into it. Creating stores, museums, and viewing points capitalizing on the disaster.

How it Changed The World

During natural disasters, it is often difficult to see positives ever coming out of the incredibly difficult and sad situation. Many people had not only lost their lives but their homes and businesses. However, like many other natural disasters throughout history, scientists got to work on analyzing the explosion and how to have better warnings in the future. The data collected from the eruption that day is now used for satellites and has saved thousands of lives. Scientists found all the new data collected extraordinarily helpful with future earthquake and volcano eruption detection. Some lessons learned after the eruption include reflection on how lumbering actually effects the environments growth, the benefit of using thermal cameras on volcanos, and better knowledge on how to respond to natural disasters. Another lesson learned from the explosion was how it affected ecosystems in other states. When the ash had risen in the air, it sometimes took spiders and other insects with it. Scientists discovered that this could actually slightly alter the ecosystem in other areas, not enough to harm those ecosystems but enough to make a difference.

Today you can take a 3.5-hour drive from downtown Seattle to Johnstons Ridge Observatory providing a spectacular view of the mountainside. There you will see the just how close David Johnston was the explosion and the incredible view he must have had just moments before his death. From there you can see the chunk of the mountain that has been blown away as well as models that show the progression over time. At the Johnston’s Ridge Observatory you can learn more about the volcano, the explosion, and Johnston’s work while observing the volcano. Also, you can now hike the area, go camping, and visit numerous other museums often catering to the 1980 explosion. It is now one of the most popular sites to visit in Washington state. Mount St. Helens has gone down in history as one of the most incredible natural disasters. Its size, power, and timing made a huge impression on those in the area and those that remember the disaster. Today you can still see how awesome the destruction was and how the land surrounding the area has worked to regrow and heal. Museums and observatories memorialize the destruction, while scientists continue to research the explosion, both working to teach future generations about the power of mother nature.
Similar entries