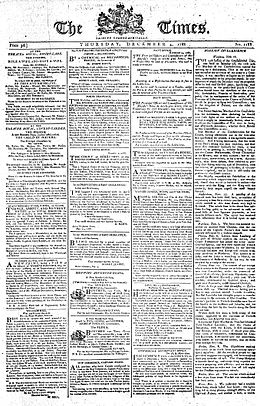 We've written a small guide on how to find historical newspapers.
In the coming posts we'll explore more deeply a few important archives for the most famous newspapers such as The Times, The Sun, The Telegraph, The Mirror and The Daily Mail.

Let's start our journey with The Times a well known British daily paper born in London and the world’s oldest continuously published newspaper.

When was "The Times" born?

According to Wikipedia The Times was born in 1785 under the name of "The Daily Universal Register" and only three years later took the name "The Times". In 1821 the sister paper The Sunday Times was published. The two newspapers stayed independent till 1967 when they became owned by the same company.

The Times became an important media in shaping the views of events of London's elite and more than this it influenced a wide range of other worldwide papers published afterwards which included "Times" in their names. To mention a few: The Times of India (India, 1838), The Straits Times (Singapore, 1845),  The New York Times (New York, 1851) and the Los Angeles Times (1881)

Highlights and curiosities about "The Times"

If you're looking for The Times back issues or you want to check the availability of The Times on your special day you can easily start your search here following these steps:

2) Choose your paper title and select your desidered edition (ex. National edition, Scottish edition, Irish edition). Please note that as titles in the archive are genuine, originals cannot be guaranteed for every date.

4) Select your pack. Depending on your needs you can go for the Newspaper Only option or choose among different gift options such as Classic Gift Box, Premium Gift Box, Wooden Gift Box, Luxury Presentation Folder, Picture Frame, etc.

5) Finally in case you want to make a gift add the recipient's name to the certificate of authenticity together with your chosen date and message.